The President would like you to stop thinking about his many failings in foreign and domestic policy where his faulty logic  leads to bad outcomes all over the world.  Instead, please could you start thinking about how you have been affected by Global Warming Climate Change?  After all, it is clear that the last 17 and a half years of no-warming are leading to dramatic effects for you, personally.  Be concerned just in time for the election, won’t you please?

No warming?  Actual cooling?  Says who?  The thermometers?  Well, let’s just adjust the numbers on our government records and we’ll fix that cooling trend right up!

Some people don’t get why others get all bent out of shape when it comes to elections.  Transparent, secure, verifiable, blah-blah, what’s the worst that could happen?

Well, your country could be stolen and made part of a different country, for example.  Allegedly.

They did the math for us on the radio show today:

In the year 2030 in a city of over a million inhabitants,
Expected ridership is projected to be 20,000 boardings (not riders, just the number of people getting on.  This is 10,000 commuters going back and forth, for example)
On a train that goes NINE (9) miles
That will cost $1.4 BILLION.
That’s the plan. Seriously. Coming soon to a ballot near you.

Because your city council thinks it is cool to try to be like New York or Seattle, but on a small scale, at huge taxpayer expense.  Not to mention the $400 MILLION six-story library you are building.

This lovely bit of math came just a couple of days after I got the opportunity to sit for two-and-a-half minutes at a train crossing while cars backed up just over a third of a mile behind me.  For a train that was still sitting at the station, so far out of down the track it was out of sight.  Note: it is technically *possible* to have the crossing arms lower as the train comes near.  It is also possible to have the crossing arms lower as the train doors are closing, or as the train begins to leave the station.  They really don’t accelerate exactly like a Maserati, you know.  So I had plenty of time to set get out the camera for this shot: 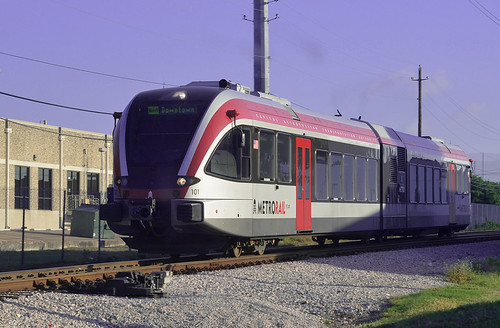 Two cars. A retard train, like the short bus we used to make fun of as kids. And traffic is backed up three lanes wide for 600 meters.

Thanks, Austin. You suck. Statistically everyone drives cars, so let’s make life hard on the car drivers. I can hardly wait until the 10+1 city council comes in to office.

The children thought it was funny, anyway.  On the way to school we were stuck in traffic behind a car with a license plate “7D6*886” and I said they spelled it wrong.

Sumdood requested a custom license plate saying “76”
First, they put a D in there, so they tried again
Then they wrote an 8 but it was wrong.
Then they got frustrated and tried to write 7 again but it came out as 8 again
Then they gave up and just put the 6.

Total fail, DPS.  You had one job!

If you are wondering why people are so upset about the Common Core Curriculum going in to schools around the country, read this.  Ace is right.  Again.

Note: being soft on islam is not the (only) problem (local reporting to the contrary notwithstanding).  Causing the total loss of a generation of Americans’ ability to be scientists and/or engineers is rather a bigger part of the problem.