I went to Little Ceasars to grab some pizza for “nobody wants to cook” night, and when I came out there was a car parked on a red curb.  For the uninitiated, this is illegal and dangerous, as well as a pain in the butt to drive around, so it is generally agreed to be a thing only jerks do.

Why look, here’s one now!  They’re fooling around on the phone.  I blew out  the rest of the picture so you could see them more clearly in the second picture.  If you know this person, feel free to tell them they suck at parking.

I was parked in the first spot in the row of cars on the other side of the jerk in the following picture. There were a couple of empty spots behind me (in front of these jokers) as well as in a parking lot immediately adjacent to this one. They CHOSE to park on the fire lane, so they could deal with their facebook or text or whatever was so all-fire important. I backed out of the parking lot, and backed into the entrance of the next lot over to shoot an overall pic.

They were standing in the exit lane of the L.C. drive through.  The car behind them, trying to exit the drive through, was apparently piloted by a Gamma also and the confusion of the person behind was apparent as they tried to figure out how to drive around a parked car.

Having sat still long enough for me to buckle up, start my car, get out my camera, check the settings, shoot a picture, back out of my spot, take another picture, back farther into the next lot, and take another picture, they finally realized they were being photographed and started off after me.  They honked as we approached the parking lot exit.  I ignored them and took off.*

*when you suspect you are being followed by persons of unknown intent, first try to drive away from them at normal (legal) speed.  Make at least four turns around a random block, to make a full circle.  Make a circle around the parking lot if you’re at a big store.  There’s no reason for anyone to follow you in a circle.  Do it again.  If they are still behind you, head for the nearest police station if you know where it is and call 911 and report yourself being followed.  Unless you know what you are doing, you aren’t likely to outrun anyone if they know what they are doing –  but if it comes right down to it, try anyway.  Good luck!

Raise your hand if you remember the President telling Congress he didn’t need their permission to start military activity in Iraq.  No, not the last President years ago – THIS President a couple days ago.  That’s right kiddies, step right up and meet the new boss!  At least THIS President has a solid history of successes in the Middle East under his belt . . . oh, wait.  Is this the appropriate time to remind everyone he’s a Nobel Peace Prize recipient?  No?  I guess I won’t do that, then.

Related: Allegations he’s screwing up Iraq before he even really gets going.  More “smart diplomacy”.  Two more stories you’ll get from Instapundit that you won’t see on the alphabet-soup network nightly news.

If you end up looking at something like this on Fathers Day surrounded by family, you may have gotten something right. 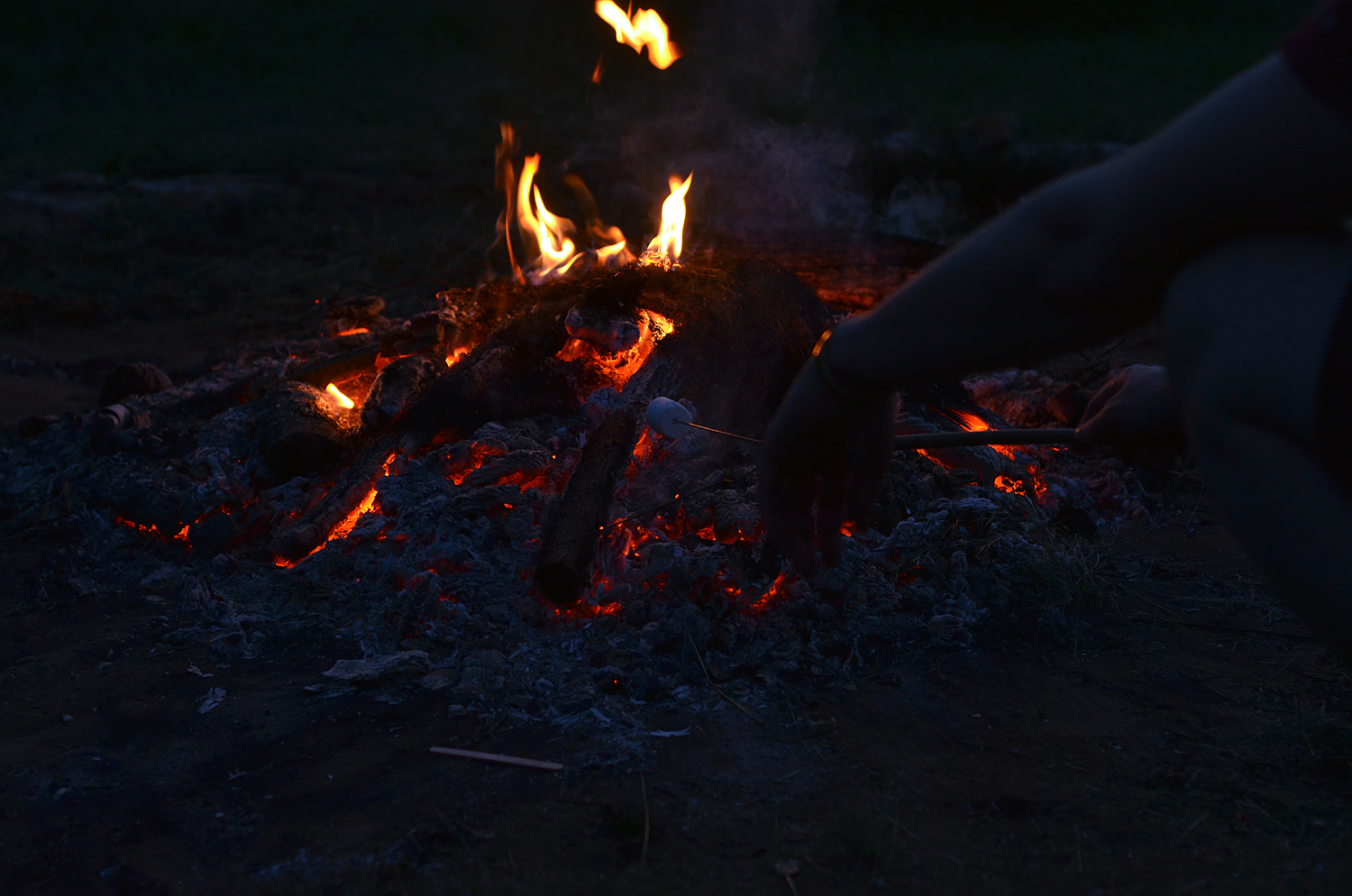 You remember the bad old days when backups and data storage were YOUR responsibility?  You know, when you had* a second hard drive online for backup AND a physically disconnected, powered-down, totally offline THIRD drive for periodic backups?  You remember when they said ‘oh let’s just throw all this [deleted] on the cloud and call it a job?

You might want to reconsider whether that was a good job.  Code Spaces Hosting was DDOS attacked and then suffered loss of data.  A lot of data.  As in, almost ALL the data they hosted for all their customers – and the backups.  CSH have closed down the business.  Everyone who was depending on their cloud based services is now completely S.O.L. if they don’t have an alternative solution already in place.

*my solution: an external hard drive that gets a fresh image pulled from each computer every so often.  It’s not up-to-the-minute current, but it beats hell out of losing all my data to a hacker.

I almost never just say “RTWT” and regurgitate someone else’s postings on the internets. This may be the first time, actually. I will only add that you must read the piece, then read the first comment and click the link in the comment.

Calvin’s Final Conversation with Hobbes
If this doesn’t bring a tear to your eye or a lump to your throat, then I don’t even want to know you.

You can’t declare victory and leave, when the enemy is merely on the run.  Readers with a memory will please recall who caught grief for the banner shown below: 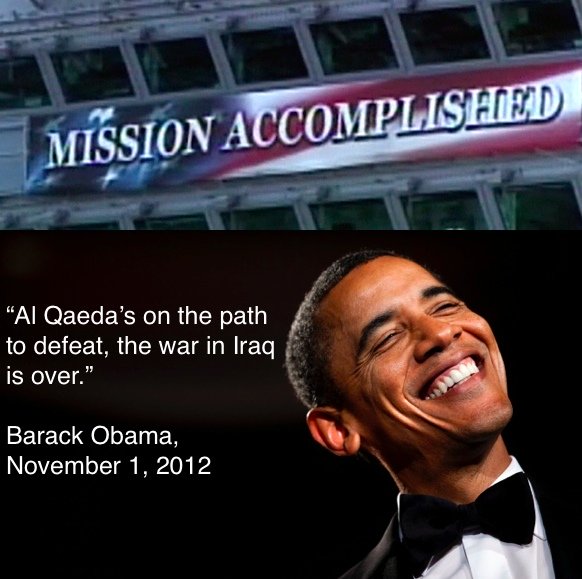 This is a hackery hat trick for me, personally.  Flickr would like you to go here to find this photo, and you have to know there are hoops to jump through, then how to jump through them, just to show an inline image like I did for this post.  So there’s two.  The trick comes when I found this image on a site that wanted me to not use it.  They set up their code so you get a password request when you want to download a picture.

It’s not their picture.  It’s all over the net.  Lame.

In Star Wars, the Senate resolved to send a commission to study the alleged military takeover of a planet.  Now, IRL, President Obama will consult closely with Congress when deciding what to do about the militant islamist re-conquest of Iraq.

Your sons bled and died on the Iraqi sand, and we’re pissing on our feet waiting to see what public opinion polls say ought to be done as the country is lost again, to the same people who killed them.  Bold, bold leadership.  Does anyone recall when gutsycall.com was a thing?  Well, here’s a gutsy call for you: let’s tell the Iraqis they need to reform their own government before we’re willing to step in and help.  Oh, wait, that’s what our fearless leader has done.

Good thing we did that whole “declare peace and go home” thing, eh?  I’m sorry, but I totally called this.  Is it that I’m smart enough to not want to run for high office, or is it that the people too dumb to realize it sucks to run a country are also too dumb to see that 1+1 will end up 2?

There are reports of Iraqi policemen beheaded alongside the roads.  The mujihadin currently taking over Iraq are the kind who cut your head off for being an infidel.  Good muslims*, according to their own religion.  The bad kind.  Instead of sending drones to strike the column approaching Baghdad, we’re Consulting Closely with Congress on this Very Important Matter!

Way to be gutsy, Mr. President.

*If you have a strong stomach and time for a thousand pages, go ahead and download this .pdf e-book.

Today I found out I paid the mortgage out of the wrong checkbook* a couple hours after I found out I left the gate open last night** and the rat-dog got out and ran off, never to be seen again.  VFDDawgs #1 and #2 don’t stray far but this one came to us as a stray.

I made up some missing dog flyers and took off on my bicycle after work to post them.  I put up one by the mail boxes, and saw a group of sixoreight boys playing in the street.  On a hunch (a.k.a. Thanks Jesus!) I turned down toward them and flashed the flyer.  I asked if they had seen a dog, and the crowd suddenly went wild.  Yes, they had seen him!  Yes, oh yes, they HAVE him!  He’s right here!  The dog was inside a nearby home, and Dad with a Serious Beard brought him out.  And then it turns out the mortgage was still not beyond the Late Fee Frowny Face late payment date, so win.

*Yes, checkbook.  Then we put them in envelopes and use stamps.  And nobody haxorz our online checking account through the snail-mail!

**I was outside last night with the 3/8″ roto-rooter cleaning out the kitchen sink drain again.  At least this time I had a cleanout fitting on an exterior wall instead of having to crawl under the sink.  I went out the side gate from the back yard to check the pipes in the front yard and heard a noise.  It turned out to be a ‘possum in the shrubbery by the house.  I had a .380 with me but a) it would wake up the sleepers in the room on the other side of the wall right there and b) it’s short, and demon-rats are sometimes bitey and c) It’s loud.  I took the short path through the house to get a pellet rifle and forgot to go back and shut the gate.  Oh well.  The opossum amusingly sniffed at the muzzle of the pellet rifle just before I blew its brains out all over the inside of the shrubbery.  That, at least, was easy.

I was asked what I think of this affair.  I thought the response was pithy enough to post here as an Official Opinion for you to consider:

I think the President knowingly* skirted the law, to trade a deserter (and possibly traitor) who needs to a court martial and possibly hanged, for five extremely-dangerous high-level terrorists, knowing* that they would be headed straight back into the war on modern civilization.

*knowing, of course, requires competence at his job. It is still hard to tell if he is a huge anti-american-exceptionalism lefty, humongously incompetent at running the country well, or merely evil. I’m hoping for incompetence at this point, but :headshake:

If he DID know this is what he was doing, it’s a treasonous and impeachable offense – that would never see a conviction in this Senate, even if the House were to impeach him.

There is the possibility that he did this to further his narrative that the war in Afghanistan is over.  If so, that tends to indicate Incompetence.  He could also have done it to distract you from the VA and IRS scandals currently* blowing up, which sounds low indeed even for a politician – but remember, Clinton started a war to distract you from his lying to Congress.  Speaking of Clinton, it is also possible that this is a way to make Mrs. Clinton look less-terrible than President Obama just before the upcoming elections, but I somehow doubt Obama would cooperate with them in that to such an extent.

********
* The VA: it’s looking increasingly like the corruption is present “in root and branch” and I hope it ends up with vets getting an insurance card to go to any ol’ civilian medical care place.  The IRS: it was just ruled in court that a particular plaintiff had a case because they were TOLD they were being hassled for having the wrong viewpoints.  This may be applicable to other cases – and there are possibly LOTS of other cases.

I’ve been doing sheetrock repairs around the house The last couple of days.  I’ve had to holler at all three of the VFDDawgs to not eat the knocked-off chips of damaged, old, painted drywall on the floor.

I guess there’s only so much smarts you can fit in a brain the size of a peanut.