This post is for me. These are my notes for myself – but maybe you will get some use out of it. It has been a problem for me, to distinguish these connectors from each other. I couldn’t find a compilation of dimension and compatibility data anywhere online, so I went and made one myself.  Most of the drawings are from Pasternack’s catalog. The pictures are from random internet searches.

These connectors are generally for use at different frequencies, and just because they can mate with each other does not mean they should be used together. Mix-and-match connections can lead to degraded performance, especially at high frequencies.  The main physical danger to the connectors is from damaged connectors -especially SMA- being tightened on a different connector.  If you just want to pass a few GHz and don’t care too much about signal quality, finger-tighten the shells and go ahead and cross-connect to your heart’s content.

We took a trip to the Mission San Jose and they had this sweet map on the wall there: 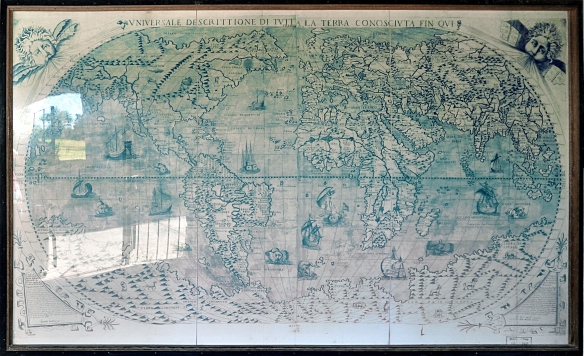 It’s got to be 10 feet wide, and is pretty impressive in my opinion.  Apparently it’s a copy of this map from the 16th century: http://arshba.ru/material/maps/1565_Vniversale_Descrittione_Di_Tvtta_La_Terra.jpg

The Supreme Court of Georgia is now tossing out cases of drivers caught Driving Under the Influence of alcohol because the drivers consented to blood tests. The lawyers contend a drunk person can’t consent to waiver of their own rights, and the court agrees. This is a very interesting development, and should be slowing down DUI cases all across America, starting immediately.

I was wandering through Reddit and came across this thread on /r/Trains.  A couple of German train dudes tempting the Grim Reaper for giggles. Okay, that’s one thing. Then one of the /r/Trains people linked up to this video to show the old Link & Pin coupling system, as an example of a common way to lose fingers.

The title of this post is my reaction, verbatim, to seeing the insanity we used to do a million times a day, all over the world. I flipped my computer the double-bird, even. [deleted] that [deleted].  Working around trains is cool and all, but I’m veeeery glad we have automatic coupling action now (also shown in the video, at the end).

I’m laying here watching Fox Sports 1 which coincidentally was on when I turned on the TV, and had some MMA fighting action going.  They hooked me with a promise of the main event, so I’ve been watching knockout after knockout of lightweights.  This last one was illustrative of a good point:

Don’t make a passive enemy mad at you.

This one mexican dude was going to win by decision, because he was the aggressor through rounds 1 and 2.  The skinny white boy he was fighting was looking mighty comfortable on the ground, showing very little imagination.  He could have stood up a bunch of times, but the white boy wanted to set up a triangle or an arm bar.  It wasn’t happening.  The Mexican guy was bleeding and slippery* and too good to be caught besides.  But the white guy kept trying, like was a training session at the gym.  He wasn’t being aggressive.  He was going to lose.  I started thinking the Mexican was going to knock the white guy out eventually, or the time would run out.

Then he kicked the white guy in the nuts.

In this ring, they would have given him five minutes to recover.  He took a minute or so, and came back a changed man.  He wasn’t at some dojo going through a seminar on fighting on your back.  He was in a fight, and now he wanted it.  He would have won round 3 on aggression and striking – but he got a good punch in, rang the other guy’s bell, and went to ground and pound.  The mexican guy lost, because he, himself, had put some fighting-mad into the white guy.

*blood is like grease, when it’s fresh.  If you are covered in blood, you are hard to grab a tight hold of.  It’s better if you can make sure it is the blood of an adversary vs. your own, but your own blood can let you slip out of hold after hold.

They have no money

They have nothing to sell to get money

They cannot get a loan

Their currency is hyperinflating and people spent all they had just to get rid of it.  Including on food that could be stored.  Now there is no storable food (or much else) in their grocery stores.

. . . and now the news has surfaced, their strategic food reserves are empty.  It may have been fed to the army (which is losing its fight) or it may have been stolen, but it is gone.  This is a problem.  This is how you begin to have terms dictated to you by your military enemies.  Ukraine may be lucky to get out of this with their west intact as a nation and the rest subdivided.

People have seriously considered it and tried it.  I blame the people at my Hyundai-related discussion forum for costing me an hour reading about helium.

Yes, you can put helium in your car or bicycle tires.  Yes, it would be lighter than air or nitrogen probably by a few dozen grams per tire.  You would save (much) more weight by tossing out the contents of your ashtray/change drawer, leaving your sunglasses at home, washing the dirt off your car or having a piss.  Also, it is the smallest element and would leak out at annoyingly high rates from your tires.

Helium is also a limited-availability natural resource with a huge price distortion caused by the USA government.  Currently it is cheap because we are selling our stockpiles**.  Market forces will react when our sale ends, and the price will rise probably dramatically, but probably we will still be able to afford helium balloons for parties.  I stopped buying helium balloons for parties when I figured this out – I’d rather have it cheaper for longer, to keep down the cost of MRI testing where people currently NEED helium (as a coolant) to save lives.

It used to be hard to make and we didn’t have gobs of it laying around.  It was $2500/ft3 in 1915 and $0.15/ft3 in 1989.  One isotope is currently still at $2000 because they make it from Tritium.  Helium is also mined with natural gas, and the prospect of “running out” of helium is something our great-great-etc. grandchildren will have to worry over, if anyone will.  100-300 years-ish.   As it gets more expensive, look for more efficient uses in imaging as well as higher incidences of recycling (vs. blowing it out to the atmosphere).  Also, expect lower-cost practical applications of MAGNETIC cooling.  (mind = blown)

The 1984 US olympic team allegedly used it to conduct heat out of their tires (helium conducts heat better*).  You can save 10 or 15 grams per tire using He but when you already have to ADD ballast to make minimum weight on a real race bike, this is not the best use of your time/money.

the Skunk Works allegedly tried and declared it to be too much hassle, even with military-ish maintenance schedules, a bottomless budget and a desperate desire to lose weight on the SR-71.

At least *some people* at Lockheed have considered it and figured they could save 3 lbs. per aircraft.  And maybe the tires could explode (but that was speculation).

**stockpiled to float our national security related blimps early in the last century, and not strictly required for exactly that these days.

*and supercooled helium doesn’t/can’t boil.  The way it transfers heat means it goes straight to gas instead of boiling internally.  Crazy.

Apparently it is a kick-you-in-the-jimmies level offense to some people when the Comic Sans font is used in comics and graphic novels.  At this point in my life, I don’t really have an opinion (or care) but it is amusing to me to know that some people actually get worked-up enough about this to write on the subject.

I was going to post this in Comic Sans font for the heck of it, but it took longer than 20 seconds to figure out how to tell WordPress which font to use, so I shrugged and didn’t.

First, I worked with a better camera than I could afford.

Then, I took it home and saw the difference in the quality of family pictures I could get with a better camera.

Then, I sold some stuff and got a better camera.

Then, I sold some stuff and got another, better-er camera.

Then, my nephew had a baby girl and put pictures up on Facebook.  I looked over at DW who was looking and “aaaaawwwww”ing at all the pictures.  All I could think for a few seconds of looking at cell phone camera pictures on Facebook was,

Oh well.  The baby is less-ugly than most babies, anyway so that’s nice.

Yes it’s been quiet around here lately.  Life happens.  I do write blog posts, but mostly not where I can put them online when they are written.  So here’s a flurry of activity clearing off my scratch pad . . .